The Amazon basin of South America harbors the largest continuous forest area on Earth, which stores nearly half the carbon that is fixed in terrestrial biomass. Moreover, the Amazon rainforest plays a key role in preserving global biodiversity and climate.

In the Amazon rainforest, major parts of the trees and shrubs are covered by fungi, lichens, algae, and bryophytes. All these organisms belong to the grouping of cryptogams, which do not form flowers but reproduce “hidden away”. Cryptogams mostly grow in communities that might be tightly interwoven. A first coarse estimate suggested that about one third of the stems, branches and leaves is colonized in the Amazon rainforest. This corresponds to a surface area of about 50 million square kilometers, or more than five times the area of the United States of America. Despite these large cover values, cryptogam communities are only rarely in the focus of investigations in the rainforest. The few studies that exist mainly investigate the species diversity and their relatedness. The functional relevance of cryptogams during biosphere-atmosphere exchange has only rarely been analyzed.

The Amazon Tall tower Observatory (ATTO; www.attoproject.org) serves as an ideal scientific platform to investigate the biosphere-atmosphere exchange processes of cryptogams and their impact on the chemistry of the atmosphere, aerosols (i.e., solid or liquid particles in the atmosphere), clouds, and the diversity of the forest. The research infrastructure is located in a relatively pristine part of the rainforest about 150 kilometers northeast of Manaus. The infrastructure comprises a 325 meter and two 80-meter-high research towers to measure various trace gas concentrations but also the microclimatic conditions in a detailed manner over long time spans.

The project focusses on the following five key research questions:

This combined analysis of different ecosystem functions of cryptogams should facilitate an assessment of the functional relevance of these communities. 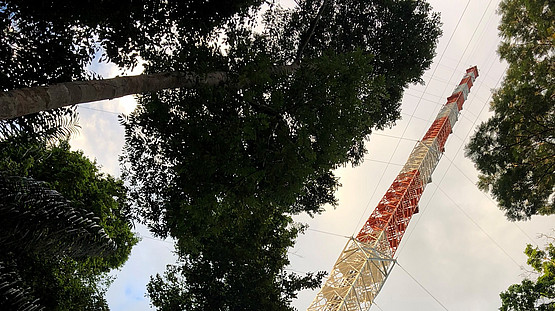 Head of the research group


Institute of Biology
Holteigasse 6
A-8010 Graz